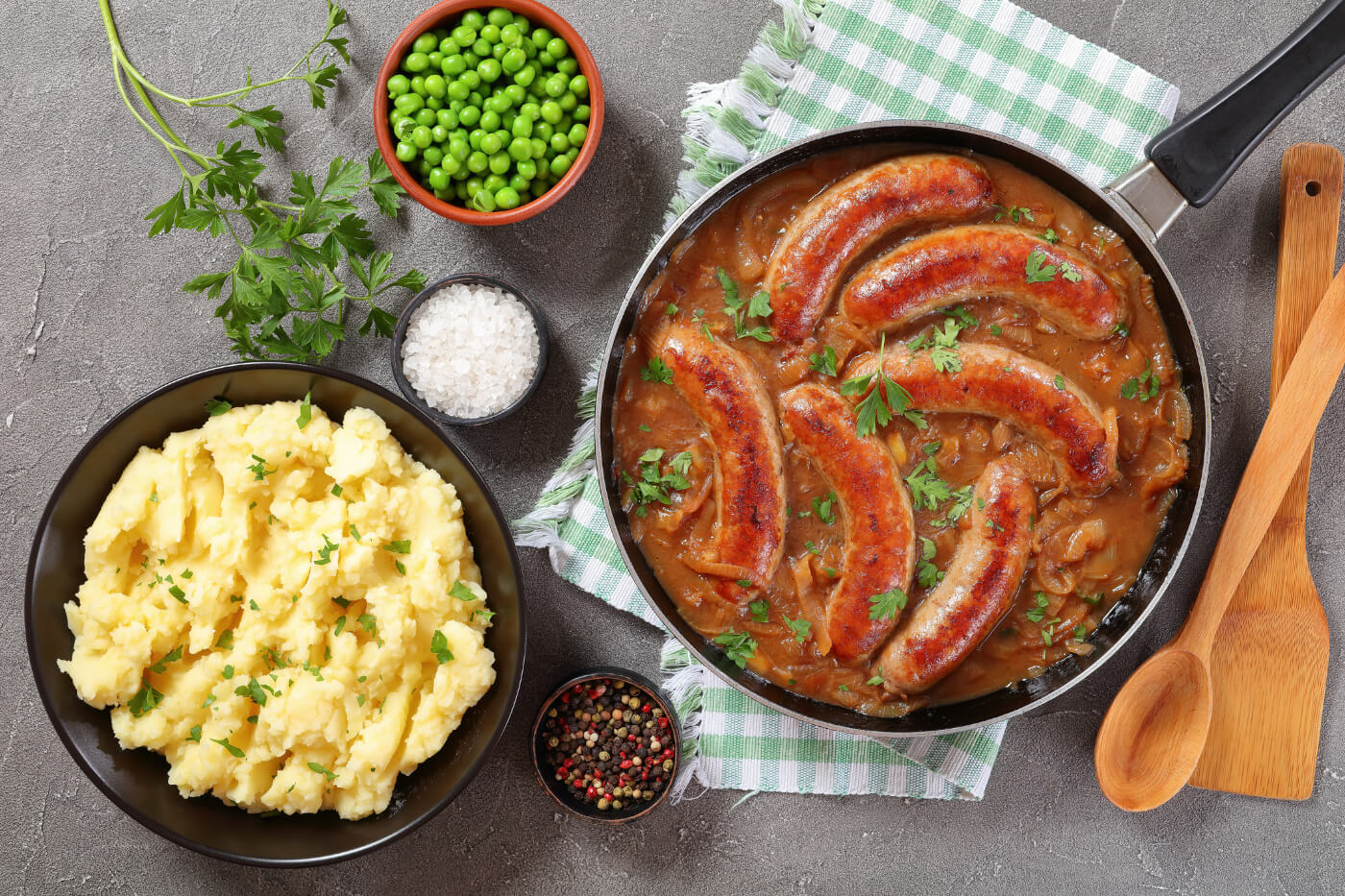 Fill up on your next trip to Ireland with some of the regions favourite dishes. With many Irish foods, you are sure to find something hearty and delicious.

Ireland has a rich farming history and has excellent overseas produce connections, making it a haven for lovers of wholesome, hearty food. Irish recipes often contain foods that are affordable and easy to obtain. They then use seasoning and cooking techniques to create tasteful meals high in nutrition.

Depending on where you are in Ireland, the staple dish will change. In coastal areas, the traditional Irish food tends to focus on fresh seafood. Whereas more inland, you will be treated to a selection of pork and vegetables.

For all things mashed, stewed and fried, look at 7 traditional Irish foods that you must try… 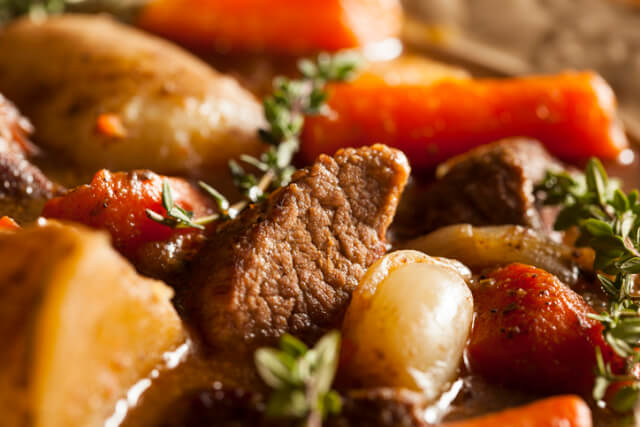 Heart-warming homemade stew is believed to have been a staple of Irish cuisine since around the year 1800 and remains a firm favourite to this day. To many across the country, Irish stew is the national dish of Ireland.

The methods and flavour of an Irish stew vary from person to person and has evolved over the years. It was all depending on which ingredients were cheaper and more common at that time. The main rule when cooking a traditional Irish stew is that it contains lamb (traditionally mutton). That is because the lamb was much more economical during the creation of this Irish food.

Nowadays, the ingredients of an Irish stew are essentially lamb or beef with potatoes and whatever leftover vegetables you have thrown together and cooked slowly throughout the day. That is often accompanied with a splash of Guinness to get a taste for Irish cuisine.

A hearty Irish stew is a perfect way to end an action-packed day by discovering some of the most beautiful castles in Ireland. 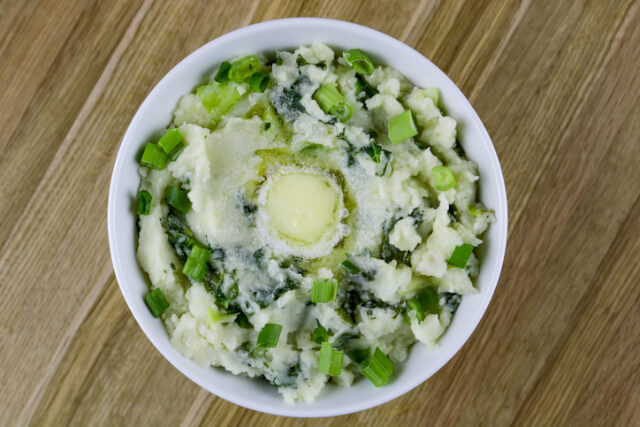 Colcannon has been a favourite comfort food in Ireland for some time and is certainly something that the nation prides itself on inventing.

Colcannon mash was introduced as a staple meal containing cheap ingredients all year round and remains a traditional Irish food today. Plus, this tasty Irish treat is often enjoyed with sausages, putting a Celtic spin on the classically English ‘bangers and mash’.

Why not try some of this traditional Irish food at one of the most traditional pubs in Ireland. It’s a great way to learn about some of the country’s heritage. 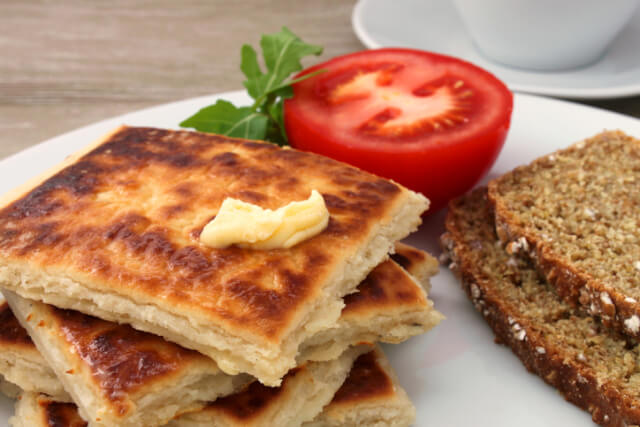 The potato farl is another of Ireland’s national dishes, a simple yet effective addition to the table.

Irish potato farls are cut from a loaf of the better-known potato bread, variations of which can be found across Europe, the United States and even Chile.

Like another traditional Irish food, soda farls, the potato farl is a large round split into quadrants and powdered with flour.

In Northern Ireland, you are likely to come across potato farls as part of the much-loved Ulster fry breakfast. That is where the quadrants are shallow-fried and buttered to add some hearty carbs to your morning meal. 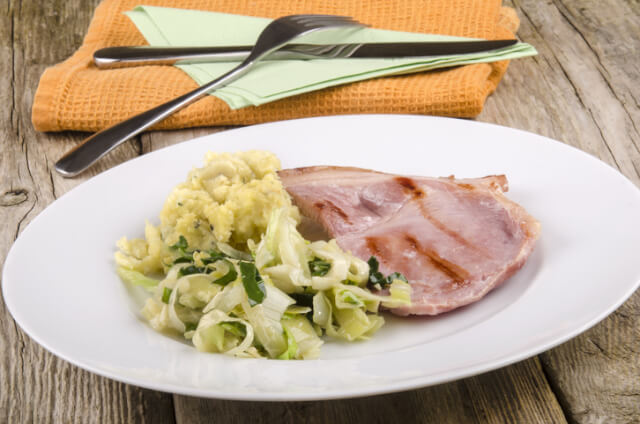 Bacon and cabbage are one of the more unique traditional Irish dishes. It is another staple meal deemed economical yet nutritious, as many families farmed their pigs and grew their vegetables.

Irish bacon and cabbage are just as simple as it sounds, consisting of boiled bacon, cabbage and potatoes, with many households and eateries topping this delicious Irish dish off with a white sauce. That is why this simple combination allows you to sample tasty and traditional Irish food with ease.

If you’re looking for that extra patriotic touch, perhaps serve your bacon and cabbage with another popular Irish dish, champ. Again combining simplicity with great flavour, the recipe bringing together mashed potato, scallions, milk and butter to create a creamy mash with an added crunch. 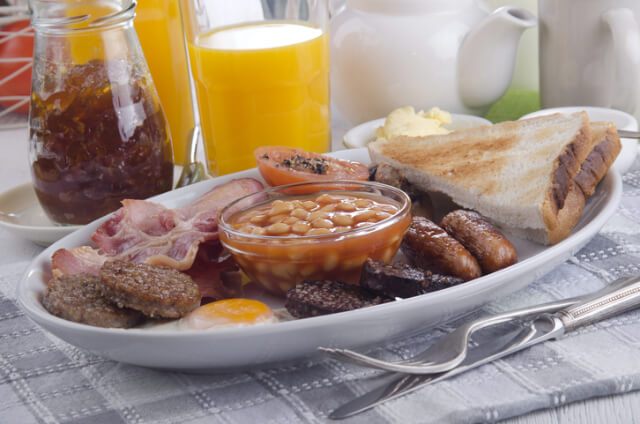 Originating in the Northern Ireland region, the Ulster Fry is one of the better-known traditional Irish dishes.

There are many variants of fried breakfasts across Ireland. Depending on where you are visiting the Ulster Fry has its differences. Unlike many other fried breakfasts, the traditional Irish Ulster Fry is served throughout the day.

The main components of an Ulster Fry are bacon, eggs, sausages and black pudding. While, the hearty Northern Ireland twist comes with white pudding, soda bread and potato bread to create the ultimate comfort dish.

A trip to the north is incomplete without sampling this mouth-watering traditional Irish dish. 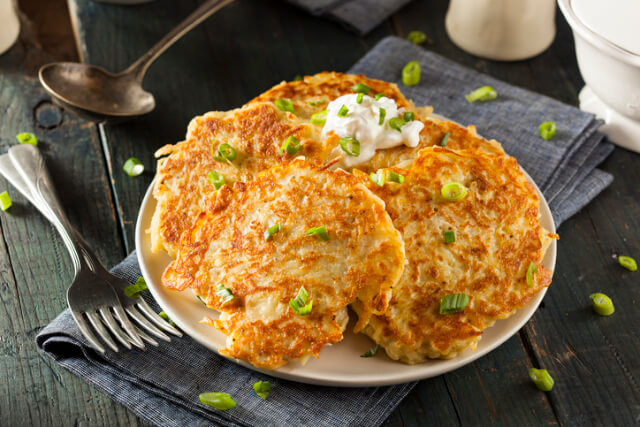 Referred to as a ‘potato pancake’, boxty is essentially grated potato and mashed potato mixed with typical pancake ingredients and pan-fried – the texture is often likened to a mixture between a pancake and a hash brown. Irish boxty can also be enjoyed in other forms, including as a boiled dumpling or baked into a loaf.

This national dish of Ireland is often eaten with butter and a cup of tea. 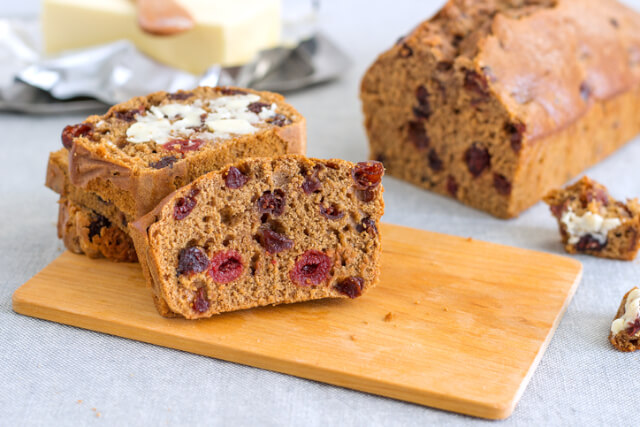 Barmbrack is one of Ireland’s favourite sweet treats. It is a sweet bread filled with sultanas and raisins to be enjoyed with your afternoon cup of tea.

The taste of the Irish Barmbrack falls somewhere in between that of sandwich bread and a cake. It is often included as traditional Irish food in Halloween celebrations as a fun fortune-telling game. That is where various items are placed within the bread, and whoever receives it is to expect an associated fortune.

In a traditional Barmbrack, you are likely to find a ring, a twig, a coin and a piece of cloth, representing marriage, an unhappy marriage, good fortune and bad luck respectively.

No matter which item you receive while eating Barmbrack, there is always a chance that your future will include a trip to the dentist!

You can enjoy these traditional Irish foods across the Emerald Isle. Whether discovering the best golf courses in Ireland or looking for things to do in Cork, the Irish food is hearty and unforgettable. 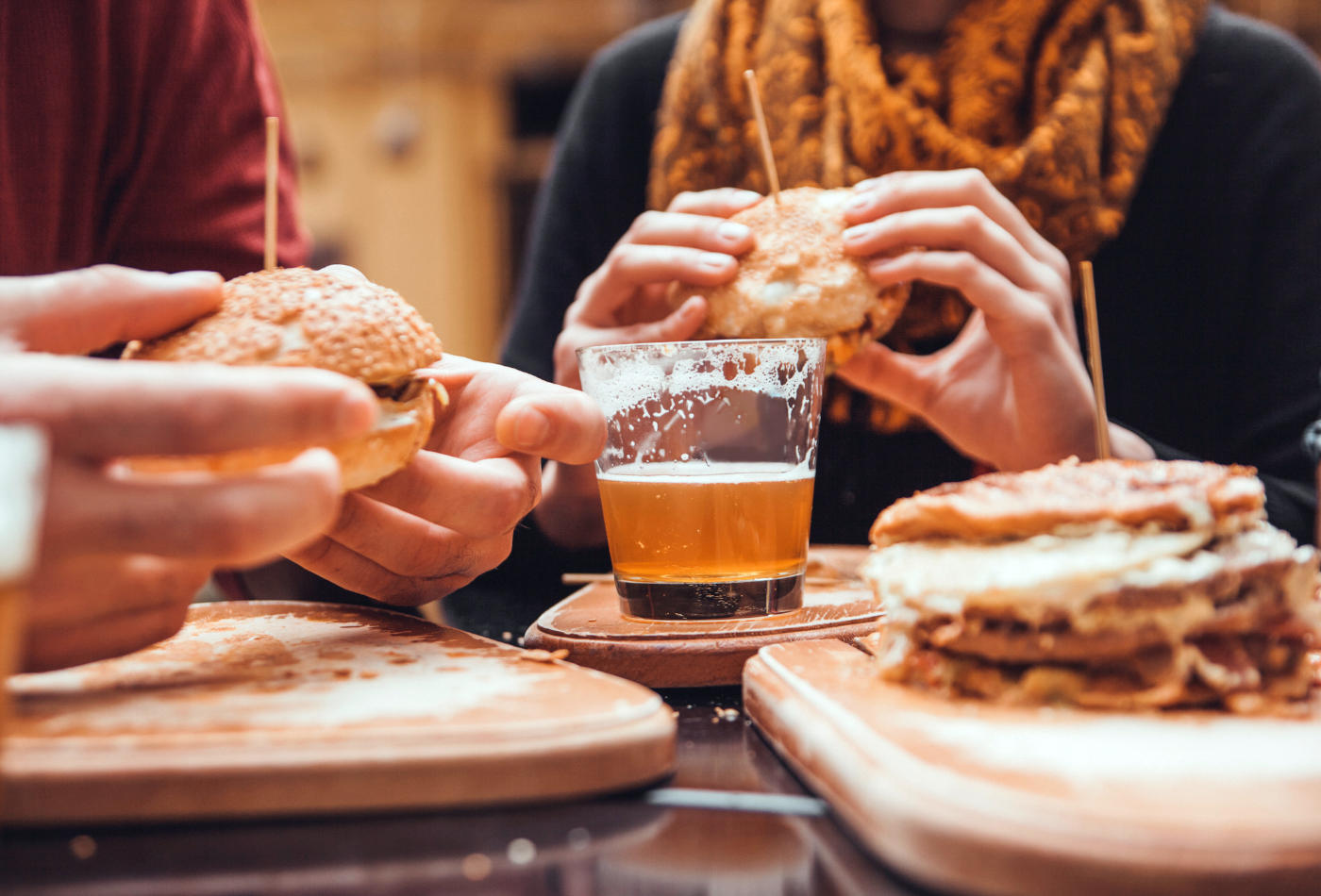 16 of the Best Donegal Restaurants

Sink your teeth into some of the best food in the county at one of these Donegal restaurants.  From... 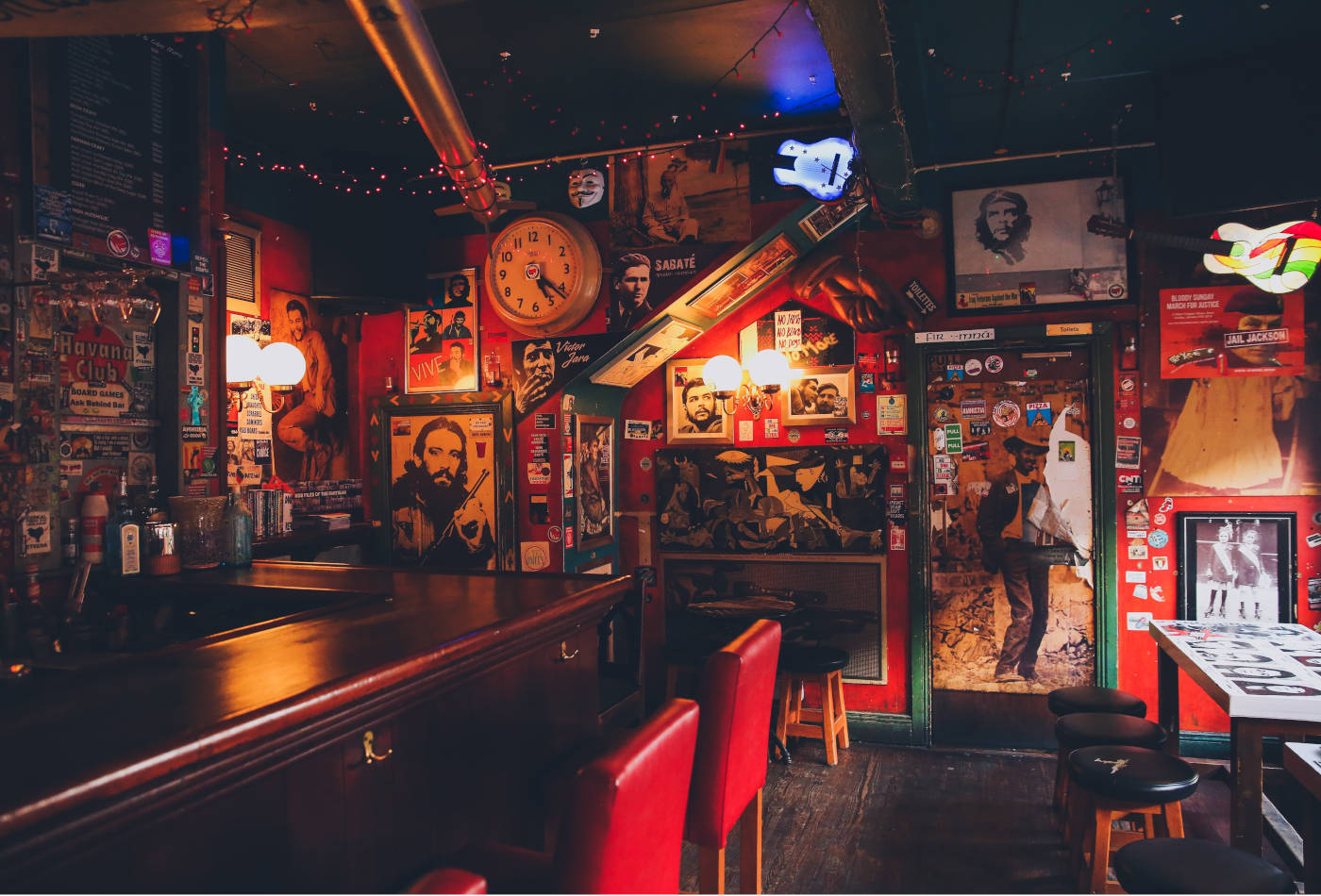 12 of the Best Traditional Pubs in Ireland

With live music, fresh ale, and a friendly atmosphere, you are sure to enjoy yourself at one of these... 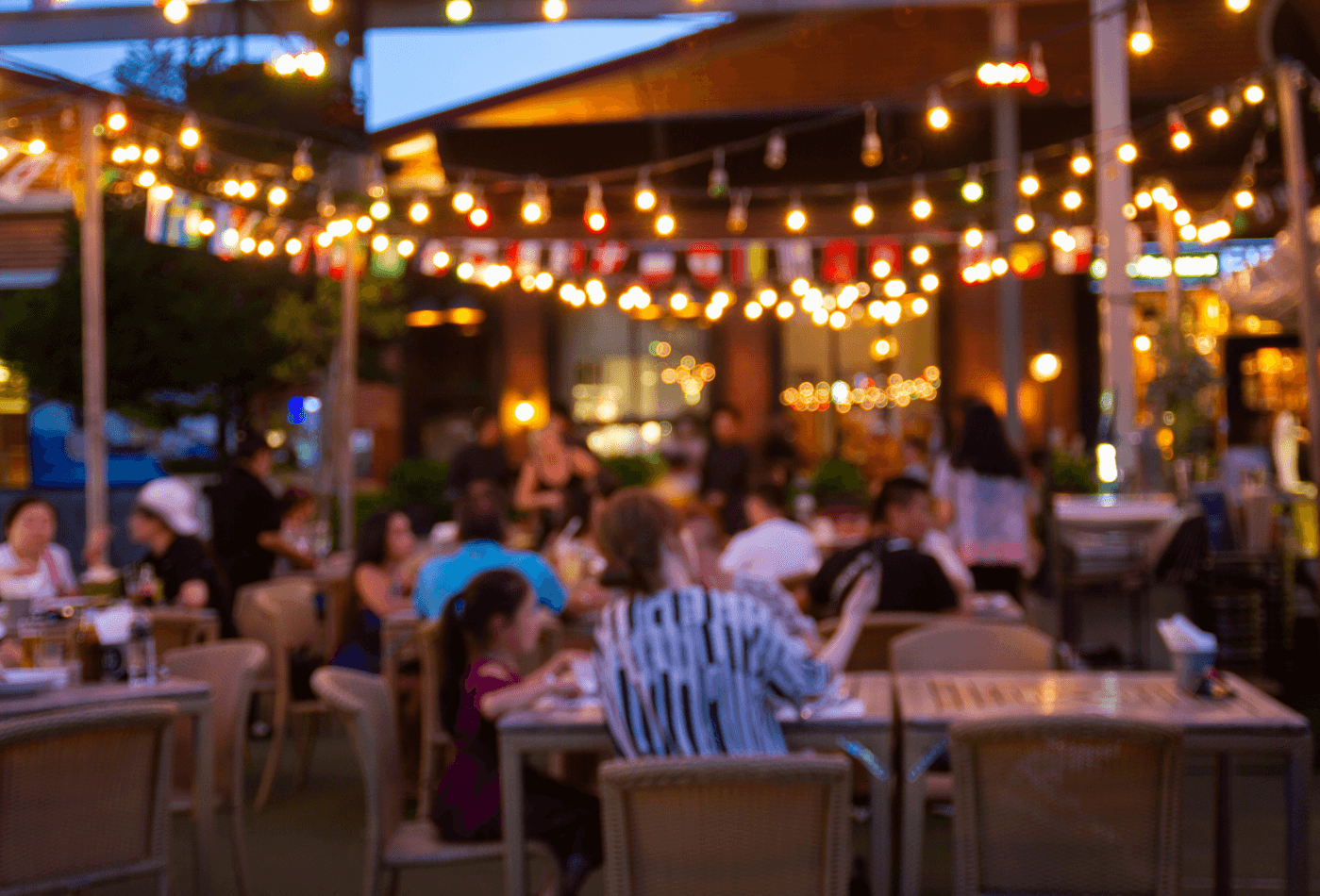 7 of the Best Restaurants in Cork

After a long day of sightseeing, there is no better way to enjoy an evening in Cork than to...